Skip to main content
February 22, 2017
Blogger is a blog-publishing service that allows multi-user blogs with time-stamped entries. It was developed by Pyra Labs, which was bought by Google in 2003. Generally, the blogs are hosted by Google at a subdomain of blogspot.com. Blogs can also be hosted in the registered custom domain of the blogger (like www.example.com).[4] A user can have up to 100 blogs per account.[5]
Up until May 1, 2010, Blogger allowed users to publish blogs on other hosts, via FTP. All such blogs had (or still have) to be moved to Google's own servers, with domains other than blogspot.com allowed via custom URLs.[6] Unlike WordPress.com, Blogger allows its users to use their own domain free of charge, while WordPress.com charges around $13 to use a custom domain.[7] Blogger cannot be installed on a web server. One has to use DNS facilities to redirect a custom URL to a blogspot domain.[8]

On August 23, 1999, Blogger was launched by Pyra Labs. As one of the earliest dedicated blog-publishing tools, it is credited for helping popularize the format. In February 2003, Pyra Labs was acquired by Google under undisclosed terms. The acquisition allowed premium features (for which Pyra had charged) to become free. In October 2004, Pyra Labs' co-founder, Evan Williams, left Google. In 2004, Google purchased Picasa; it integrated Picasa and its photo sharing utility Hello into Blogger, allowing users to post photos to their blogs.
On May 9, 2004, Blogger introduced a major redesign, adding features such as web standards-compliant templates, individual archive pages for posts, comments, and posting by email. On August 14, 2006, Blogger launched its latest version in beta, codenamed "Invader", alongside the gold release. This migrated users to Google servers and had some new features, including interface language in French, Italian, German and Spanish.[9] In December 2006, this new version of Blogger was taken out of beta. By May 2007, Blogger had completely moved over to Google-operated servers. Blogger was ranked 16 on the list of top 50 domains in terms of number of unique visitors in 2007.[10]
On February 24, 2015, Blogger announced that as of late March it will no longer allow its users to post sexually explicit content, unless the nudity offers "substantial public benefit," for example in "artistic, educational, documentary, or scientific contexts."[11] On February 28, 2015, accounting for severe backlash from long-term bloggers, Blogger reversed its decision on banning sexual content, going back to the previous policy that allowed explicit images and videos if the blog was marked as "adult".[12]

As part of the Blogger redesign in 2006, all blogs associated with a user's Google Account were migrated to Google servers. Blogger claims that the service is now more reliable because of the quality of the servers.[13]
Along with the migration to Google servers, several new features were introduced, including label organization, a drag-and-drop template editing interface, reading permissions (to create private blogs) and new Web feed options. Furthermore, blogs are updated dynamically, as opposed to rewriting HTML files.
In a version of the service called Blogger in Draft,[14] new features are tested before being released to all users. New features are discussed in the service's official blog.[15] In September 2009, Google introduced new features into Blogger as part of its tenth anniversary celebration. The features included a new interface for post editing, improved image handling, Raw HTML Conversion, and other Google Docs-based implementations, including:
In 2010, Blogger introduced new templates and redesigned its website. The new post editor was criticized for being less reliable than its predecessor.[16]

Starting in February 2013, Blogger began integrating user blogs with multiple country-specific URLs. For example, exampleuserblogname.blogspot.com would be automatically redirected to exampleuserblogname.blogspot.ca in Canada, exampleuserblogname.blogspot.co.uk in the United Kingdom. Blogger explained that by doing this they could manage the blog content more locally so if there was any objectionable material that violated a particular country's laws they could remove and block access to that blog for that country through the assigned ccTLD while retaining access through other ccTLD addresses and the default Blogspot.com URL. However it should be noted that if a blog using a country-specific URL was removed it is still technically possible to access the blog through Google's No Country Redirect override by entering the URL using the regular Blogspot.com address and adding /ncr after the .com.[17]
These redirects have privacy implications for anonymous users: those who share a link to a Blogger site obtained from their web browser's address bar may inadvertently reveal which country they are currently in – unless they fool (e.g. using a VPN service located in another country) or override the country detection, or manually edit the link to refer to blogspot.com before sharing it.

Blogger allows its users to choose from various templates and then customize them. Users may also choose to create their own templates using CSS. The new design template, known as "Dynamic View", was introduced on 31 August 2011[18] with Dynamic Views being introduced on 27 September 2011.[19] It is built with AJAX, HTML5, and CSS3. The time for loading is 40 percent shorter than traditional templates, and allows user to present blog in seven different ways: classic, flipcard, magazine, mosaic, sidebar, snapshot, and timeslide. Readers still have the option to choose preferable views when the blog owner has set a default view.[20] Some of the widgets (e.g., Labels, Profile, Link List, Subscription Links, Followers and Blog Archive etc.) are available for Dynamic Views; other templates are chosen by the blogger.
In April 2013, Blogger updated its HTML template editor that has some improvements to make it easy for the users to edit the blog's source code. The editor was updated with syntax highlight, number line and jump-to-widget button for ease of editing the code.
For over half a year dynamic views users were suffering from a bug causing custom CSS and page navigation often not to load properly. This happened because a JavaScript routine rendered the page before it was loaded. A blogger user fixed the template and published the fix.[21]

Blogger has launched mobile applications for users with mobile devices. Users can post and edit blogs, and also share photos and links on Blogger through their mobile devices. Not only advanced mobile devices, such as smartphones, are being considered, since users can also post blogs via traditional cell phones by SMS and MMS.[25]
Screenshot of Blogger app on iOS
The major two mobile operating systems that Blogger focuses on are Android and iOS.[26][27] Blogger allow users to edit blogs anywhere through the app and either publish the blogs or save them as drafts. Quick navigation from posts and drafts is accessible from a list. Users can attach photos by taking a picture with a Blogger app or selecting pictures from their photo galleries. Sharing current locations on posts is also possible by tabbing My Location bar and adding locations. Users can also share photos and links directly to Blogger.
Blogger also provides dynamic mobile views for the blogging compatibility with mobile devices and smart phones. They enhance the readability accuracy on these smart devices, but editing a blog on the blogger app remains an open issue for the users.

Blogger has been blocked for various periods of time in the following countries:
Blocking of *.blogspot.com domains by keyword-based Internet filtering systems is also encountered due to the domain containing the substring "gspot".

Blogger has the following limitations on content storage and bandwidth, per user account:[31]
On February 18, 2010,[35] Blogger introduced "auto-pagination", which limited the number of posts that could be displayed on each page, often causing the number of posts on the main page to be less than that specified by the user and leading to a hostile response from some users.[36][37]
Private blogs are limited to only 100 members.

Popular posts from this blog

difference between plc and embedded system

Stuxnet is a maliciouscomputer worm believed to be a jointly built American-Israelicyber weapon.[1] Although neither state has confirmed this openly,[2] anonymous US officials speaking to the Washington Post claimed the worm was developed during the administration of Barack Obama to sabotage Iran’s nuclear program with what would seem like a long series of unfortunate accidents.[3]
Stuxnet specifically targets PLCs, which allow the automation of electromechanical processes such as those used to control machinery on factory assembly lines, amusement rides, or centrifuges for separating nuclear material. Exploiting four zero-day flaws,[4] Stuxnet functions by targeting machines using the Microsoft Windows operating system and networks, then seeking out Siemens Step7 software. Stuxnet reportedly compromised Iranian PLCs, collecting information on industrial systems and causing the fast-spinning centrifuges to tear themselves apart.[5] Stuxnet’s design and architecture are not doma…
Read more 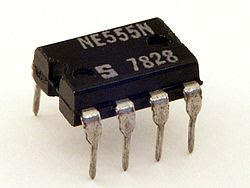 555 timer IC NE555 from Signetics in dual-in-line package TypeActive, Integrated circuitInventedHans CamenzindFirst production1971Pin configurationGND, TRIG, OUT, RESET, CTRL, THR, DIS, VCCElectronic symbol
Internal block diagram The 555 timer IC is an integrated circuit (chip) used in a variety of timer, pulse generation, and oscillator applications. The 555 can be used to provide time delays, as an oscillator, and as a flip-flop element. Derivatives provide up to four timing circuits in one package.
Introduced in 1971 by American company Signetics, the 555 is still in widespread use due to its low price, ease of use, and stability. It is now made by many companies in the original bipolar and also in low-power CMOS types. As of 2003, it was estimated that 1 billion units are manufactured every year.[1]
Contents 1Design1.1Pins1.2Modes1.2.1Bistable1.2.2Monostable1.2.3Astable2Specifications3Derivatives3.1556 dual timer3.2558 quad timer4Example applications4.1Joystick interface circuit…
Read more